As a result of the advocacy of the SAFE Center’s Chief Counsel for Policy and Legal Advocacy, Amanda Rodriguez, and Director Susan Esserman, along with the involvement of the Maryland Human Trafficking Task Force, the essential support and testimony of survivors, and the leadership of Maryland legislators, the following bills successfully became Maryland law: 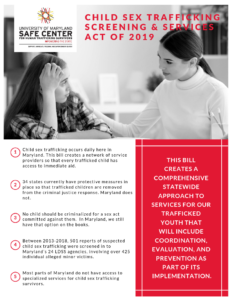 This law creates a comprehensive statewide approach, to provide specialized services for high-risk or trafficked youth (up to and including age 24) in every part of the state by 2022.It will increase coordination and prevention efforts, and ensure that victims and survivors of human trafficking receive the services they need to heal and rebuild their lives and futures.

The SAFE Center worked closely with legislative sponsors Senator Susan Lee (D-Montgomery), and Delegate Brooke Lierman (D-Baltimore City), and the Maryland Safe Harbor Working Group to get this law passed. Among its provisions, it will require that children involved with the Department of Social Services are screened for sex trafficking and that cases are referred to a navigator who can quickly connect the victim with local services. 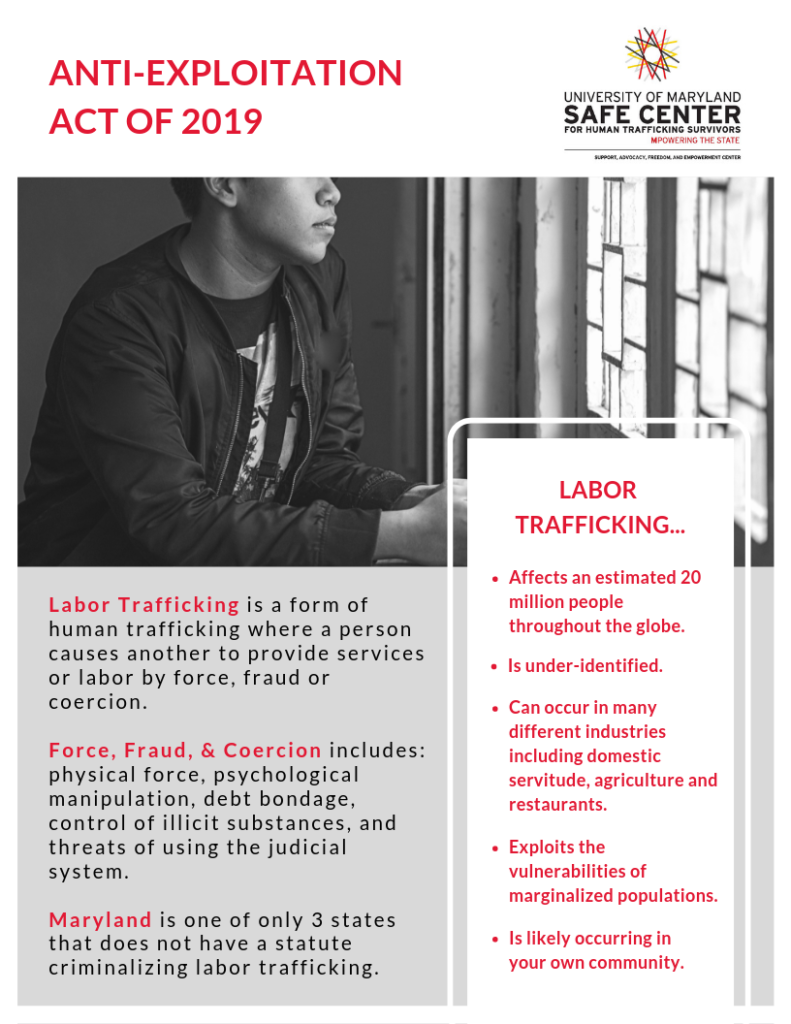 Labor trafficking, a form of human trafficking in which a victim is compelled to provide labor by force, fraud or coercion, is under-identified, yet is happening in Maryland and throughout the US. Labor trafficking victims are threatened, subjected to abuse, made to work extremely long hours under inhumane conditions, are often denied food and medical care and live as virtual prisoners. Until this bill passed, Maryland was one of only three states in the US without a specific labor trafficking statute.

In response, the SAFE Center worked with Senator Susan Lee and Delegate Wanika Fisher (D-Prince George’s) to propose a labor trafficking statute that would provide the necessary framework for investigating and prosecuting labor trafficking crimes at the state level. Shortly after the Anti-Exploitation Act of 2019 was introduced at the Maryland General Assembly, the SAFE Center’s Director, Susan Esserman, co-authored an op-ed in the Washington Post with Senator Lee and Delegate Fisher in support of the bill, which they claimed would mark “a strong step forward toward preventing and deterring labor trafficking in our state.” 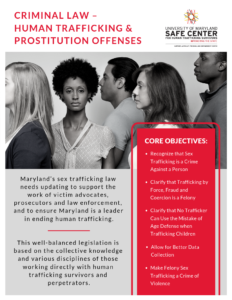 Sponsored by Senator Susan Lee and Delegate Jesse Pippy (R-Frederick and Carroll), this legislation—which came to be known as “The Sex Trafficking Recodification Bill of 2019”— enacts important changes to Maryland’s human-trafficking related statutes. The changes were requested by law enforcement, prosecutors, victim advocates, and other stakeholders and provide a better foundation to support their work to end human trafficking in Maryland.

The SAFE Center is thankful for the many partners who advocated for and enabled the passage of these laws, particularly the leadership of the committee chairs and bill sponsors Senator Susan Lee, Delegate Brooke Lierman, Delegate Jesse Pippy and Delegate Wanika Fisher. We also applaud the steady determination of the many community organizations and activists – including Community of Hope AME Church, Love AME Church, and other partnering churches – who advocated on behalf of these bills through written and verbal testimonies, phone calls, and emails to their representatives.

We are incredibly grateful to survivor leaders who worked tirelessly to ensure that trafficking survivors’ voices and needs were heard during this legislative session. Their courage and guidance were vital to the success of these bills.