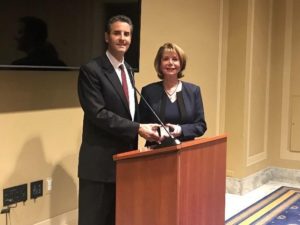 On November 30th, the Founder and Director of the University of Maryland SAFE Center for Human Trafficking Survivors, Ambassador Susan Esserman, delivered the keynote address at the St. Andrew’s Human Rights and Religious Freedom Reception on Capitol Hill. Sponsored by Congressman John Sarbanes and hosted by members of the Committee on Foreign Affairs, the Hellenic Caucus, the Helsinki Commission, the Tom Lantos Human Rights Commission, and the International Religious Freedom Caucus, this congressional reception is held annually to advocate for religious freedom and the restoration of human rights on a global scale.

Ambassador Esserman’s keynote address, “Raising the Curtain on Human Trafficking in America,” highlighted recent research on the extent of human trafficking and the key factors causing this crime to continue occurring in the United States. Stressing the importance of federal, state, and local level collaboration in the fight to end trafficking and support survivors, Ambassador Esserman urged members of Congress to reauthorize the Trafficking Victims Protection Act.