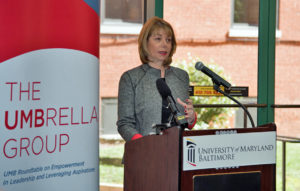 “A young woman was trafficked into the United States from Mexico, tricked into crossing the border under the cover of night. The lure? The quintessential promise of the American dream — a job, a better life, the ability to support her young child. The job that awaited her? Forced prostitution. The woman was thrust into a life of fear, trauma, and cruelty. She was trafficked up and down the East Coast, from New York to the Carolinas. Eventually, she escaped her human traffickers and found her way to help at the University of Maryland Support, Advocacy, Freedom and Empowerment (SAFE) Center for Human Trafficking Survivors.

The harrowing tale was told by Ambassador Susan G. Esserman, JD, founder and executive director of the SAFE Center, during a luncheon presentation titled “Raising the Curtain on Human Trafficking in the United States” at the University of Maryland, Baltimore (UMB) on Feb. 27.”